Since Bolores was used for a relatively short period of time, and not many people were buried there after the 2nd millennium BC (the Early Bronze Age), it can not help us understand the impact of environmental changes on the lives and health of people between the Copper and Bronze Ages. For this reason, we turned to another site – Zambujal. Zambujal has been excavated for many decades by the German Archaeological Institute. Michael Kunst is the current director of the excavations. It is likely – though not certain – that the people buried at Bolores lived at the settlement of Zambujal. Zambujal is located about 2 kilometers to the southeast of Bolores. Its many radiocarbon dates tell us that Zambujal was occupied in the beginning of the 3rd millennium BCE and abandoned in the first half of the second millennium BCE. This means that people lived at Zambujal at the same time that Bolores was used as a burial.

What do we know about the environmental changes that took place in the area of Bolores and Zambujal? Today, this region is characterized as a subtropical dry forest, with a combination of Maritime and Mediterranean conditions. However, during the beginning of the Holocene, warmer and wetter regions prevailed, and an estuary was formed along the Sizandro valley (around 7000 BCE). Due to intensive agriculture and forest clearance during the Holocene, between 7500-5000 BCE, these estuaries began to fill with alluvium, making them smaller and more brackish. As settlements expanded, so too did deforestation, contributing further to estuary decline. We know this because of interdisciplinary studies carried out by the German Archaeological Institute.

A fortified settlement, Zambujal was built up through five phases of construction. Some of its extant walls and towers measure 4 meters in height, with the original construction believed to measure 9 meters, making it one of the most fortified settlements in the region. Zambujal was an important center that served both domestic and defensive functions. Within its walls, round houses and hearths, food remains, such as seeds and the bones of domestic animals, and artifacts, such as bone tools, polished stone axes, and ceramics, were recovered. Evidence of copper-working was also found.

The diet of domesticated animals is tied to the local ecology. If a change in diet is observed, that indicates an ecological change in response to climatic conditions or human activity. The remains of the ovicaprids (sheep and goats) from Zambujal were subjected to isotope analysis (C, N, and O). Just as the isotopes of the human remains of Bolores can tell us something about the diet of these people, isotope ratios in animals found at Zambujal can tell something about their diet. Anna Waterman coordinated this study. 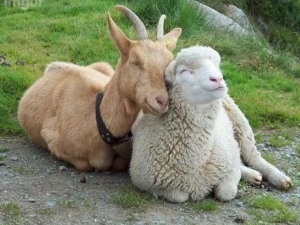 Although few people would mistake a living sheep for a living goat, their bones are surprisingly similar. So, when they are found in archaeological sites, particularly as broken fragments, it is often hard to tell which animal one is looking at. That is why archaeologists sometimes refer to bones of these animals as ovicaprids (Ovis = sheep; Capra = goat).

Twenty-samples of ovicaprid bones (mandibles or maxillae, the lower and upper sections of the jaw) from distinct individual animals from Zambujal were analyzed. They represent animals from two different stages in Zambujal’s occupation: 3000-2500 BCE and 2500-1800 BCE.

What did their isotopes reveal? During both periods, the ovicaprids appear to be receiving most of their proteins from local C3 plants (wheat, barley, legumes, and olives) and a few native C4 plants. Millet is the dominant C4 plant in the region, but it is not clear if it was being widely cultivated in the Iberian Peninsula until the Bronze Age. Seaweed and sea grasses could have been other sources of this isotope. However, the consumption of C4 plants decreased over time. This indicates that the animals were being grazed in different locations in response to the changing ecological conditions. It’s very possible that these ecological conditions were changed as a result of increased agriculture altering the landscape and requiring prehistoric people to find new pastureland.

How is that similar to the kinds of changes in landscape and ecology that are happening today?